In the name of Allaah, the Most Merciful, the Bestower of Mercy.

As a last ditch attempt [May 1996], five of us travelled to Ipswich to again try and convince  Abu Muntasir Manawar Ali to give up his destructive Qutubist-Jihadist path. We ate dinner with him in his house and set about advising him and discussing with him the error of his ways. He was adamant upon his ideology, and his support of Ali Tamimi, Muntada and others. After the sitting, we collectively wrote a full account of what transpired at the meeting. Here’s a scan of the first page of the minutes and the names of the attendees: 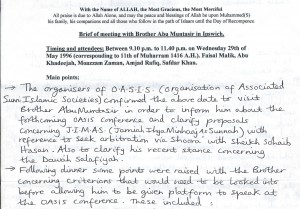 In Abu Muntasir’s speech there was support for al-Muntada al-Islamee (London), a group known for its allegiance to Muhammad Suroor (a political agitator and caller for revolt in the Muslim countries); support for Abdur-Rahmaan Abdul-Khaaliq, an Egyptian living in Kuwait, who speaks of Tawheed al-Haakimiyyah as a fourth distinct category of Tawheed and praises the efforts of the political agitators; he spoke of his desire to co-operate with groups and parties who oppose the Salafi doctrine. All of this we recorded in these minutes that are still in my possession.

After the visit of Ali Tamimi in March of 1996, and our discussion with Muntasir in May of 1996, “Jimas” was [officially] in the eyes of every Salafi student of knowledge a Qutubist-Jihaadist group, interested in political activism and revolution.

This is yet another proof that this split was actually doctrinal and creed-based. Even with the character faults and personal conflicts between the likes of Abu Muntasir and Abu Aliyah (the two main figureheads in JIMAS), those involved in the da’wah preserved and maintained unity, but once the differing became doctrinal and ‘aqidiyy in nature, unity upon false a creed was no longer an option.