Shaikhul-Islām Ibn Taymiyyah (d. 728 AH) stated: “Allāh, the Most High, said: “And they shall not cease to differ except those on whom your Lord has bestowed His Mercy – and for that did He create them.” So He has stated that the people on whom mercy is bestowed do not differ. And the people on whom mercy is bestowed are the followers of the Prophets in both speech and action. They are the people of Qur’an and Hadeeth (Ahlul-Qur’ān wal-Hadeeth) from this Ummah – and whoever opposes them in anything then he is the one who leaves the mercy of Allāh to the extent he opposes them.” (Majmoo’ al-Fatāwā 4/25)

Abu Ja’far at-Tahāwī (rahimahullāh) said: “We see that the Jamā’ah (the united body) is the truth and correct, and division/splitting is deviation and punishment.” (Creed of At-Tahāwiyyah 2/775 (the sharh))

Shaikhul-Islām Ibn Taymiyyah (rahimahullāh) said: “Indeed the united body (al-Jamā’ah) is a mercy and splitting is a punishment.” (Majmoo’ al-Fatāwā 3/421)

Allāh, the Most High, said: “Verily those who divide their Religion and break up into sects, you (O Muhammad) have no concern with them in the least…” (Al-An’ām: 159) Al-Baghawī said: “They are Ahlul-Bid’ah and Ahwā (people of innovations and desires).” (Sharhus-Sunnah 1/210) Ash-Shātibī said: “Sectarianism is from the specific characteristics of the innovators.” (Al-I’tisām 1/113)

Ibn Taymiyyah (rahimahullāh) stated: “Innovation is coupled with splitting just as the Sunnah is coupled with the Jamā’ah (the united body). So it is said: Ahlus-Sunnah wal-Jamā’ah (the people of Sunnah and the united body) just as it is said Ahlul-Bid’ah wal-Furqah (the people of innovation and splitting).” (Al-Istiqāmah 1/42)

And by Allāh besides whom there is none worthy of worship, this is what we have learnt from the ‘ulamā of this age over the last 25 years and more; this is what we learnt from Al-Albānī, Ibn Bāz, Ibn Uthaimīn, Muqbil Ibn Hādī (rahimahumullāh), and Sālih al-Fawzān, Rabī’ Ibn Hādī, Ubaid al-Jābirī and other than them.

Those with a disease in their hearts have tried to infiltrate and sow discord between the Salafis who are Ahlus-Sunnah – but the scholars have remained vigilant and repelled these incursions and continue to do so. Shaikh Rabī’ Ibn Hādī stated: “By Allāh there are people who wear the garbs of Salafiyyah, they do not enjoin the good, nor forbid the evil let alone refute ahlul-bid’ah. This is something present, and by Allah, these people are more severe upon Salafiyyah than the clear and open people of innovation and the opposers. They wear the garbs of Salafiyyah, and they deceive the people, they rebut the truth, and they aid falsehood – and this is something present…” (Quratul-‘Aynain p. 100) 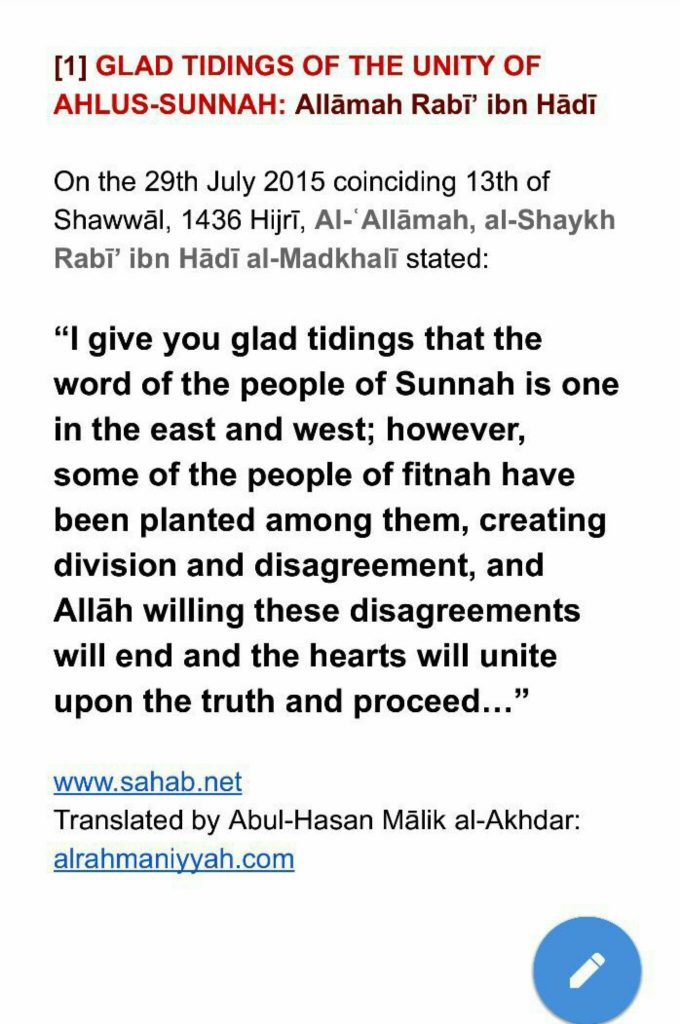 This is not to say that differing cannot arise between brothers, but that differing is usually restricted and confined (inshā’ Allāh) and one should not seek to make that widespread. Shaikh Al-Albānī (rahimahullāh) stated: “It is said that differing is blameworthy in the Sharī’ah, and it is obligatory to try to be free of it as far as one is able because it is from the causes of weakness in the Ummah just as Allāh has said: “Do not dispute with one another lest you lose courage and your strength departs…” (al-Anfāl: 46)” (As-Silsilatud-Da’eefah 1/77)

Alhamdulillāh, we have noticed over the last decade or so is that there is an unprecedented level of cooperation and unity between the Salafis in the United Kingdom and elsewhere: the students of knowledge, the callers, the administrations of Mosques and the general folk. More and more people are coming to this blessed da’wah by the grace and bounty of Allāh. Even in our visits to Madīnah we see hundreds if not thousands flocking to 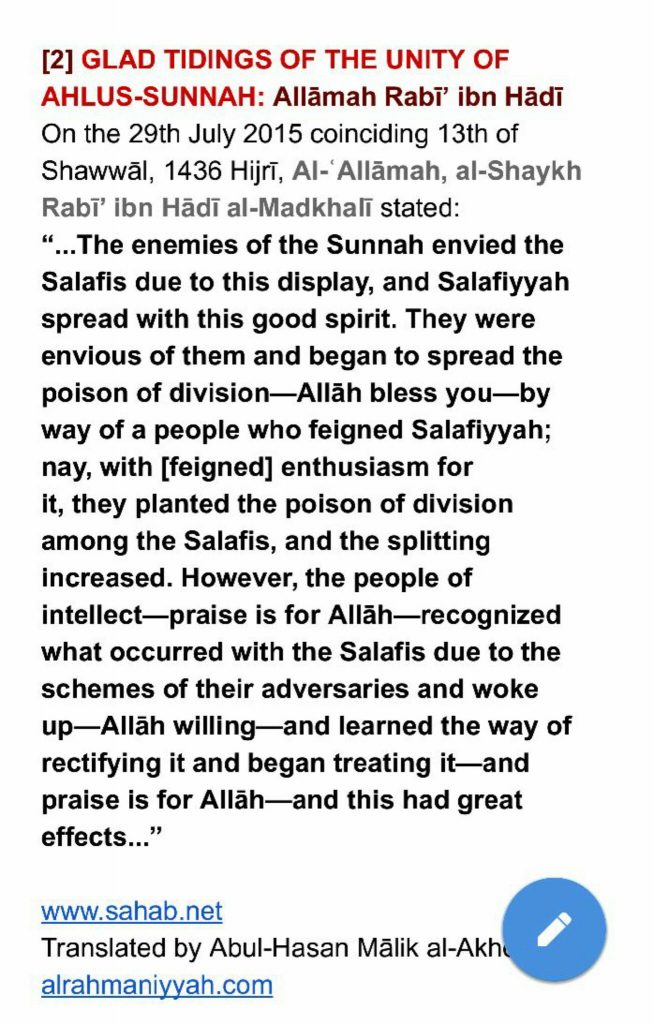 seek knowledge at the hands of the scholars such as Shaikh Rabī’, Shaikh ‘Ubaid, Shaikh Abdul-Muhsin Al-Abbād, Shaikh Ali Nāsir and the others who are younger such as Shaikh ‘Abdullāh al-Bukhārī, etc. People travelling to Madīnah from all over the world in pursuit of knowledge. Alhamdulillāh, Salafiyyah is a da’wah that is uplifting, a light for the hearts, it cannot but give good-cheer to the souls of those who embrace it.

And all praise is due to Allāh, Lord of the worlds.