In the name of Allah, Most Merciful, the Bestower of Mercy.

All praise is for Allah, Lord of the words, and may the peace and blessings of Allah be upon His servant and final Messenger, Muhammad. To proceed:

Shaikh Al-Islam Muhammad Ibn ‘Abdul-Wahhāb (may Allah have mercy on him) said:

Imām Ahmad Ibn Hanbal stated: Muhammad Ibn Ja’far narrated to us saying: ‘Awf narrated to us from Hayyān Ibn Al-‘Alā who said: Qatan Ibn Qabeesah narrated to us from his father that he heard Allāh’s Messenger (sallallāhu ‘alayhi wa sallam) say: “The driving away of birds (al-‘iyāfah) and drawing lines in the sand (at–tarq), and believing in evil omens/superstitions (at–tiyarah) are all from the affairs of sorcery (al-jibt).”

‘Awf said explaining the words in the above hadeeth: “Al-‘iyāfah is the releasing of birds. At–tarq is the drawing of [geometric] lines in the sand. As for Al-Jibt, then Hasan stated: ‘It is the scream of Shaytān.'” Its chain of narration is good — also recorded by Abu Dāwood, An-Nasā’i and Ibn Hibbān in his Saheeh with a connected chain. [1]

An-Nasā’ee reported from Abu Hurayrah that Allah’s Messenger (salallāhu ‘alaihi wa sallam) said: “Whoever ties a knot and then blows into it has done magic, and whoever does magic has committed idolatry. And whoever ties an amulet is entrusted to it.” [3]

Ibn Mas’ood narrates that Allah’s Messenger (salallāhu ‘alaihi wa sallam) said: “Shall I not inform you about sorcery? It is tale-carrying and rumour-mongering (nameemah) that creates enmity between the people.” Reported by Muslim [4]

01. Al-‘Iyāfah is the driving away of birds. Among the people in the times of pre-Islamic ignorance were those who would practice this. They would say: If the bird flies to you from right to left then it means such-and-such. And if it comes directly at you, then it means such and such will occur. If it comes to you from behind you, then such and such will happen. They would claim knowledge of the unseen from this flight of the birds (‘iyāfah) and would believe these things actually happen. For this reason, it is counted as a type of magic.

02. Drawing of lines with stones (at–tarq) on the ground was for the purpose of claiming knowledge of the condition of those who are absent, and claiming that a person will arrive on such-and-such a day and other such matters from the news of the unseen. So, these are lines in the sand.

03. There occurs in a hadeeth where the Prophet (salallāhu ‘alaihi wa sallam): “There was a Prophet would draw lines so whoever’s line agreed with his line then that is in his favour.” [6] Meaning: The drawing lines for that Prophet was permitted and not forbidden (because it was in accordance with what was revealed to him).

Shaikh Ahmad Ibn Yahyā said: Explaining the term at–Tarq in the first hadeeth above to mean drawing lines on the ground is a point of differing. But what we have said is correct.

As for the term Al-Jibt in the first hadeeth above, then Al-Hasan Al-Basri (rahimahullāh) said: “It is the scream of Shaytān.”

Meaning that a person increases in magic with every increase in the knowledge astrology.

05. Allah’s Messenger (salallāhu ‘alaihi wa sallam) said: “Whoever ties a knot and then blows into it has done magic, and whoever does magic has committed idolatry. And whoever ties an amulet is entrusted to it.”

Why is the magician considered to be a mushrik (polytheist)? Because he depends on foul satanic spirits in his performance of magic, and he seeks their aid. So that is why he is a mushrik. And also because he cannot make his magic complete except by doing what is mentioned in the narration of blowing on knots, etc.

06. Allah’s Messenger (salallāhu ‘alaihi wa sallam) said: “Shall I not inform you about sorcery? It is tale-carrying and rumour-mongering (nameemah) that creates enmity between the people.”

Rumour-mongering is referred to as a type of sorcery — and it involves slander and lying in order to cause corruption in the hearts of the people just like the corruption caused by magic and sorcery or even worse. So rumour-mongering is to carry tales that lead to corruption. So, the one who carries a tale from one person to another with the intention of causing discord enters into the meaning of this hadeeth. He has achieved what the sorcerer desires to achieves in terms of harm and destroying the love that existed between people; filling the hearts with bitterness, malice and rancour, to the extent that a man erupts with anger and rage towards his brother. So this is the great harm that results from nameemah (rumour-mongering) just like what is achieved through magic, if not worse!

Al-Bayān (eloquent speech) is a permissible “magic”. So if a person is well-spoken and eloquent and can speak powerfully, able to embellish and beautify his speech, then he has an effect upon the hearts and is able to persuade people. The reason why the Prophet (salallāhu ‘alaihi wa sallam) said these words was due to a man who criticised an individual from the tribe of Tameem and then praised him. The man said: “I was angry so I said the worst of what I knew. And then I was pleased, so I said the best of what I could find.” So the Prophet (salallāhu ‘alaihi wa sallam) said: “Some eloquent speech (al-bayān) is magic.” [7]

So speech in this context was referred to as “magic” because of its effect in turning the hearts and due to it persuading them. This is allowable “magic”, inshā’-Allāh (if Allāh wills). However, eloquence in speech may sometimes contain oppression where the person of falsehood may be more eloquent than the truthful and deserving person. So, he adorns his falsehood with embellished speech and eloquence so that he is successful in front of the judge or other people. The Prophet (salallāhu ‘alaihi wa sallam) alluded to that in his saying: “I am but a human being; and you present your disputes to me. And perhaps some of you are more eloquent and persuasive than others in presenting your arguments. So, I judge in accordance with what I hear. So if I give someone’s right to another [due to his use of eloquence and persuasive speech] then do not take it because in truth I am giving him a portion of the Fire.” [8] 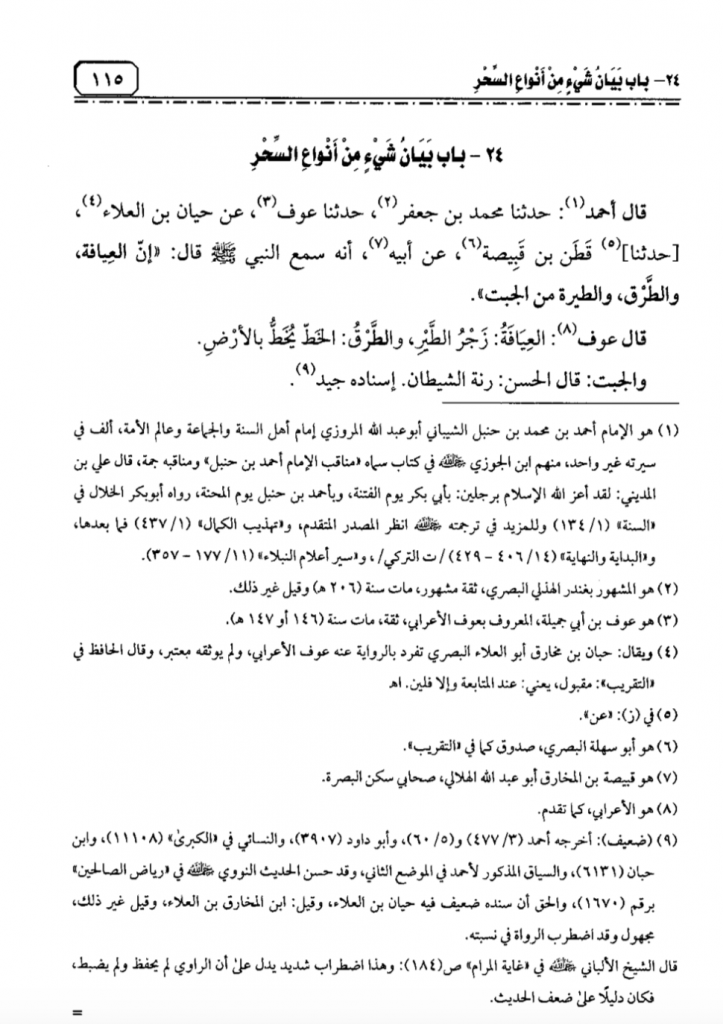 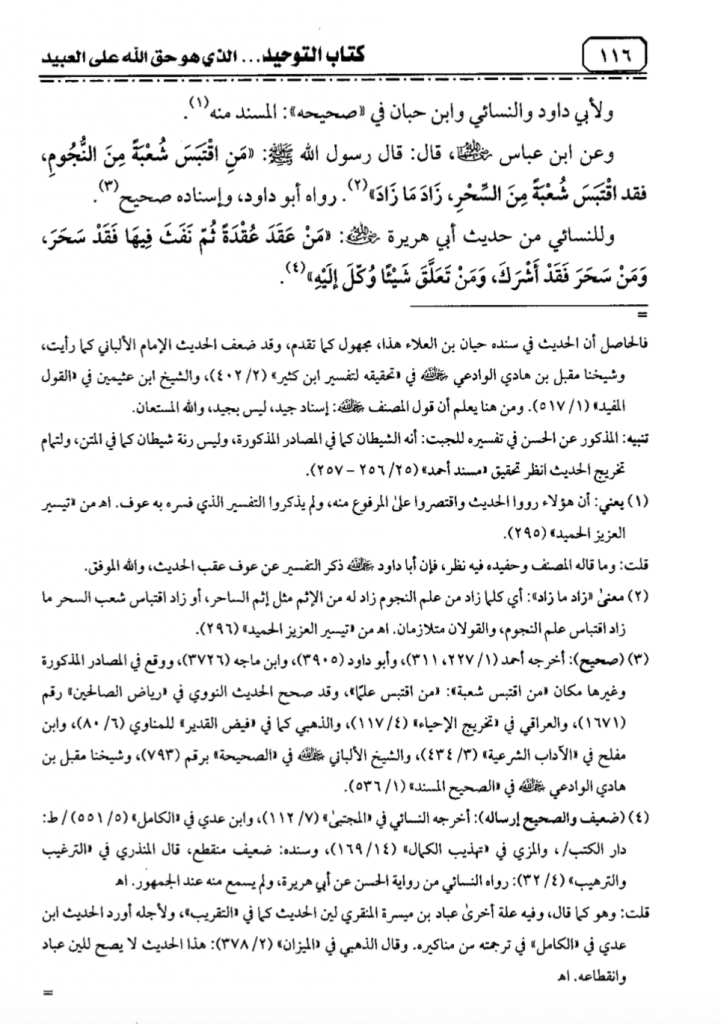 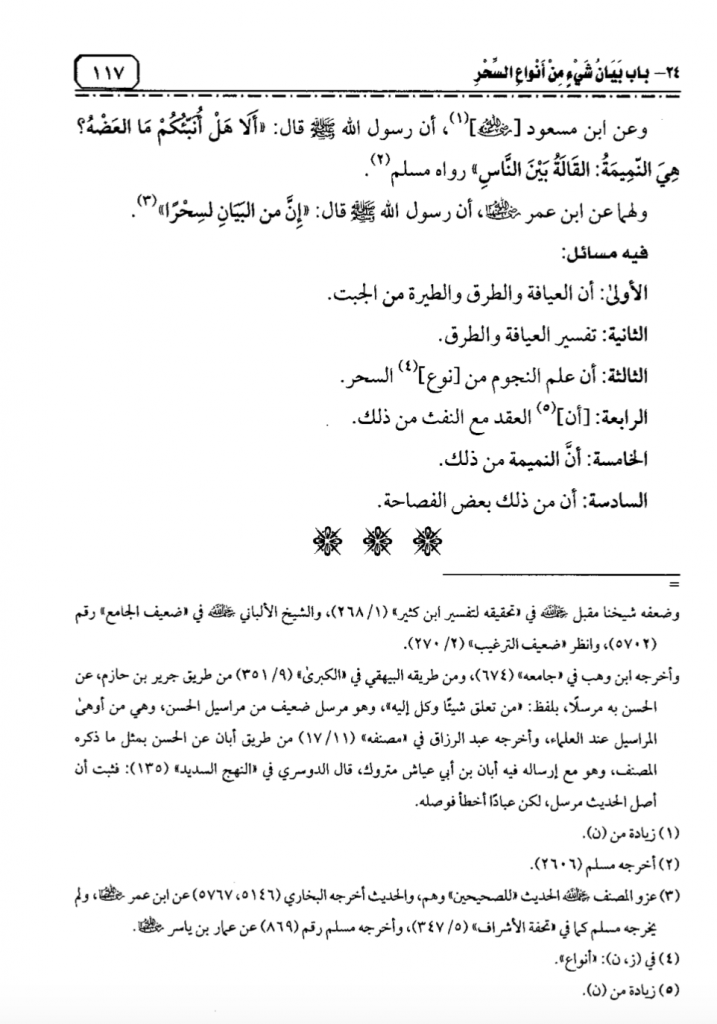