What is the Ruling on Celebrating the Prophet’s Birthday and Other Similar Events?

There should be no doubt in our minds that Allah (the Most High) has perfected for the Ummah the Religion and completed His favour upon them, just as He (the Most High) stated:

“This day, I have perfected your religion for you, completed My Favour upon you, and have chosen for you Islam as your religion.” (Al-Mā’idah: 3)

And Allah only took His Prophet (صلى الله عليه وسلم) from this world after he had conveyed the message, and Allah had completed the Sharee’ah through him. The Messenger did not leave an affair that brings one closer to Allah except that he guided the people to it, and he did not leave a matter that would take a person far from Allah except that he warned against it. Ahmad and Ibn Khuzaymah reported that the Prophet (صلى الله عليه وسلم) said:

“Whoever introduces something into this affair of ours (i.e. Islam) that which is not from it will have it rejected.” And Muslim reported in his Saheeh (1718) from her that Allah’s Messenger said:

“Whoever performs a deed that is not from this Religion of ours will have it rejected.”

The term (فَهُوَ رَدٌّ) means that this act of worship is utterly rejected by Allah and therefore prohibited. That is because Allah has not given permission to anyone to increase upon His Religion and to add to it. On the contrary, Allah (the Most High) has condemned it in His Book and forbidden it, as in His saying:

“Or have they set up rivals with Allah, who have legislated for them from religion that which Allah has not allowed.” (Ash-Shoorah: 21). Muslim reports in his Saheeh (867) from Jābir (رضي الله عنه) that the Prophet would say in the Friday Khutbah:

“The best of speech is the Book of Allah, and the best of guidance is the guidance of Muhammad. The worst of all matters are those newly introduced into the Religion, and every innovation (bid’ah) is misguidance.” The narrations of Allah’s Messenger (صلى الله عليه وسلم) and his Companions forbidding innovations into the Religion are too numerous to mention in this short discussion. It is these narrations, however, that form the foundation of the answer to the question regarding the birthday of the Prophet (صلى الله عليه وسلم).

This ritual was invented by the latecomers, centuries after the Prophet (صلى الله عليه وسلم) and his Companions (رضي الله عنهم). They introduced this celebration without any proofs at all, then the people made taqleed (blind following) of them, and it became widespread until this time of ours. Yet not a single one of them can bring for its practice any evidence from the Revelation, or from the early generations, or from the Four Imāms. 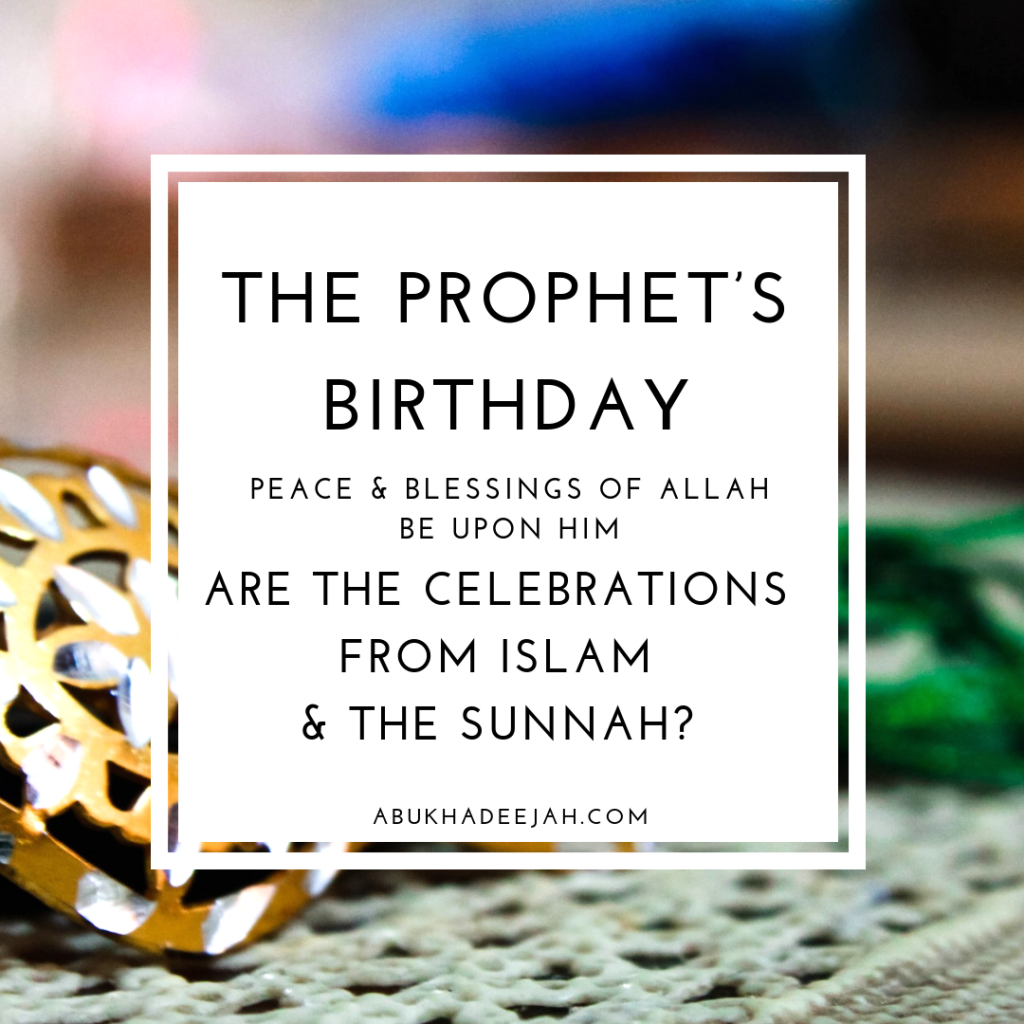 The first people to innovate this celebration of the birthday of the Prophet (صلى الله عليه وسلم) were the tribe of Bani ‘Ubaid al-Qaddāh, those who called themselves the Fātimids. They were Bātini, Rāfidi, Ismā’eeli Shi’ah as Imām Adh-Dhahabi stated in As-Siyar (15/141). Its origins have no connection to the Sunnah or to Islam. They also celebrated the birthdays of ‘Ali ibn Abi Tālib, Fātimah, Hasan and Husayn (may Allah be pleased with them) – they even celebrated Christmas. They appeared in the era of Banul-‘Abbās and ruled over Egypt from 360 AH onwards. They used to believe that Allah is in-dwelling in His creation, in the concept that the Revelation has hidden esoteric meanings that are only known to their own scholars and ‘saints’, leading them to be considered as unbelievers by the great Scholars of ahlus-Sunnah of that time. Before them, there was no celebration of the Mawlid (birthday) of Allah’s Messenger (صلى الله عليه وسلم).

It is binding upon all Muslims to adhere to and become accustomed to the way of Allah’s Messenger (صلى الله عليه وسلم) and his Companions (رضي الله عنهم) because that is the Straight Path and strong, steadfast Manhaj (methodology) of Islam that protects it from the corruption and distortion of the previous nations. It is established in an authentic hadeeth reported by Ahmad ibn Hanbal in his Musnad (4131) and Ad-Dārimi in his Muqaddimah (202) that Abdullāh ibn Mas’ood said:

“Allah’s Messenger (صلى الله عليه وسلم) drew for us a line one day. Then he said: ‘This is Allah’s Straight Path.’ Then he drew lines to the right of it and to the left of it. Then he said: ‘These are divergent paths. Upon each of them is a devil that calls to it.’ Then he recited the verse: ‘And this is My Straight Path so follow it, and do not follow the other paths for they will separate you away from Allah’s Straight Path.’ (An’ām: 153)“ And Allah (the Most High) said:

“Indeed, in the Messenger of Allah, you have a fine example to follow for him who hopes in the meeting with Allah and the Last Day and remembers Allah much.” (Al-Ahzāb: 21) And his example does not include the celebration of his birthday. The Prophet forbade innovations: “And whatsoever he forbids you, abstain, and fear Allah” as occurs in the verse above.

So all of these proofs should make it clear to you that these celebrations are innovations – and that it is upon all Muslims to abandon them and disregard them and warn your relatives, friends and neighbours against these foreign and alien practices. It is obligatory upon the Muslims to have an understanding of the Religion and to give importance to studying the biography of the Prophet (صلى الله عليه وسلم) – in that there is sufficiency for the Muslims, and the Ummah is not in need of these novelties and innovations.

Likewise, for the night of Al-Isrā and Al-Mi’rāj (the Night Journey and Ascension of the Prophet (صلى الله عليه وسلم) into the Heavens). The most correct saying of the people of knowledge is that its day is unknown and all of the ahādeeth that mention its date are weak, not established and unproven. Whoever claims that the night of Isrā and Mi’rāj in the 27th Rajab is very mistaken because there is nothing in the Sharee’ah that supports this claim. Even if we accepted, for the sake of argument, that the date was known, then there is still no evidence to show that it is a time of celebration. Rather, it is an innovation (bid’ah) since Allah has not given authority or permission to anyone to introduce these celebrations into the Religion. And if these celebrations were permitted and legislated, the Messenger of Allah (صلى الله عليه وسلم) and his Companions (رضي الله عنهم) would have preceded us and encouraged those who came after them with the same celebration. Since it was not done and not supported, except by some innovators centuries later, proves that it is an innovation, misguidance and an incursion into the pure Islamic faith.

So if your father or mother celebrate this birthday, speak to them politely, and say as Ibrāhīm (صلى الله عليه وسلم) said to his father:

“O, my father! Verily! There has come to me of knowledge that which came not unto you. So, follow me. I will guide you to a Straight Path.” (Maryam: 43)

This article is adapted and edited from an answer by Shaikh Ibn Bāz (رحمه الله) to a question on the celebration of the ‘Eid Milād An-Nabī from the book, At-Tahdheer minal-Bid’ah (pp. 46-49)