Over the past two weeks I along with Abu Khadījah (حفظه الله) had the pleasure of visiting our brothers for the sake of Allāh at Troid (Masjid al-Furqān). We thank the brothers Abū Zakī ʿUmar, Abū Sakīnah Aḥmad, Abū Rumayṣah,  Abū Anas Amīr, Abū Mujāhid Muḥammad, Muḥammad Sid, Munīb ʿAden and others for their warm company and hospitality and making our visit comfortable, pleasurable and memorable. A diverse community (Afghan, Albanian, Arab, Somālī, Pakistānī, Caribbean etc.) united upon Tawḥīd and Sunnah.

Already this year the brothers at Troid have invited several students of knowledge in order teach, nurture and cultivate their community upon Tawḥīd, Sunnah and Salafiyyah. This includes Abū Ḥakīm, Abū Idrīs, Mūsā Richardson, Abu Muʿāẓ Taqwīm and ʿUmar Quinn. They have a very active prison inmates program through which many accept Islām and others pursue knowledge of Islām after repenting for their crimes. In addition, there is a very significant online presence which can be accessed at troid.ca and which has a long history spanning to the late 1990s. This resource includes plentiful articles, audio content, active forums and social media accounts. We have known these brothers for close to twenty years, and alḥamdulillāh their daʿwah has increased in strength over the past few years despite the organised attempt by a group of criminals to sabotage and destroy it in June 2011.[1] That event cleansed out the “weeds” and after these  weeds self-exposed themselves and became outcast, the blessings only increased wal-ḥamdulillāh and the daʿwah grew larger and stronger.

The brothers at Troid have a very strong concern for the Muslim youth. This can be seen by the fact that many of their seminars throughout the past few years have been centred around the youth and the obstacles and challenges they face in practicing Islām upon the way of the Salaf within Western societies.

In my series of talks, I spoke about the value of time and life and divided the life of a person into five stages on the basis of what Ibn al-Jawzī ([Islamic phrases=”Rahimahullah”]V[/Islamic]) had written. The first stage is that in which the parents oversee the nurturing of the child until it reaches maturity (bulūgh) which is around 15 years of age. Then there is young adulthood (shabāb) which is the most important part, the one in which lies the greatest struggle and effort. This lasts for around two decades till the age of thirty-five. From this point onwards a person transitions to mature adulthood (kuhūlah), which starts at 35 until 50. After this is senior age (shaykhūkhah) from 50 to 70 years of age.  Finally there is the period of senility (haram) from 70 years onwards. The period of young adulthood is the most crucial and important part to the life of a youth. Despite the strong nurturing which a parent may gave prior to bulūgh, a young adult is under great danger during his youth in being captivated by both worldly lusts and pursuits (shahawāt) and religious deviation (shubuhāt). I focused my talks around the major obstacles that stand in the way of the young adult. First, ignorance (jahl) of the dīn. Second, Iblīs and his plots and tricks. Third, trials (fitan) of the world, which include trials of the lure of kufr and shirk, trials of wives and children (young adults can also be parents and have children), trials of women (fulfilling lusts, desires unlawfully), trials of wealth, trials of status and honour. Fourth, trials of evil company which hinder a young adulthood and divert him away in matters that are beneficial to him in dīn and dunyā. This evil company includes the sinful (followers of desires, inclined to the world) and the deviant (innovators, deviants, groups, parties, sects). All of these matters were covered over a series of seven lectures.

As for Abū Khadījah’s talks, they consisted of plentiful advice and admonition to parents with respect to their duties to their children as well as beneficial and highly practical advice in helping  to create upright, pious, mature young adults with good morals and manners. He gave advice on how to establish an Islāmic home within Western societies and most of his talks were centered around this general theme. He warned the youth against extremist ideologies and groups such as ISIS al-Qāʿida and their propaganda. He also warned against social threats and challenges that undermine the young adult’s morals and manners. Some of the useful points and benefits he conveyed included: not to order the children with things you do not do yourself, children should not contradict and oppose their parents, being a good role-model for your children, leading and teaching by example, teaching children to be independent and self-reliant, avoiding inconsistency in commanding and forbidding them,  emulating the Companions ([Islamic phrases=”Radhiyallahu ‘anhum”]M[/Islamic]) in raising their children. He also covered the ḥadīth of Huẓayfah bin al-Yamān ([Islamic phrases=”Radhiyallahu ‘anhu”]I[/Islamic]) warning the youth against innovation and its callers. In his last lecture, Abū Khadījah spoke of Allāh’s Messenger as the best example of a father ([Islamic phrases=”Shallallahu ‘alaihi wa Sallam”]H[/Islamic]) and as a teacher, nurturing children upon consistency in worship, teaching them to be self-reliant and aiders to their parents in the household chores, to maintain ties of kinship, to help them develop habits such as praying fajr in jamāʿah, being constant in dhikr, to show utmost respect and kindness to their mothers. Abū Khadījah gave seven lectures in total and also answered many questions related to the subject.

Alḥamdulillāh, the masjid was full on both weekends and there were also plenty of online listeners, so we ask Allāh to reward the organisers, to put it on their scale of goods deeds, to bring much benefit through these lectures and to grant us all thabāt and ikhlāṣ in our statements and actions. 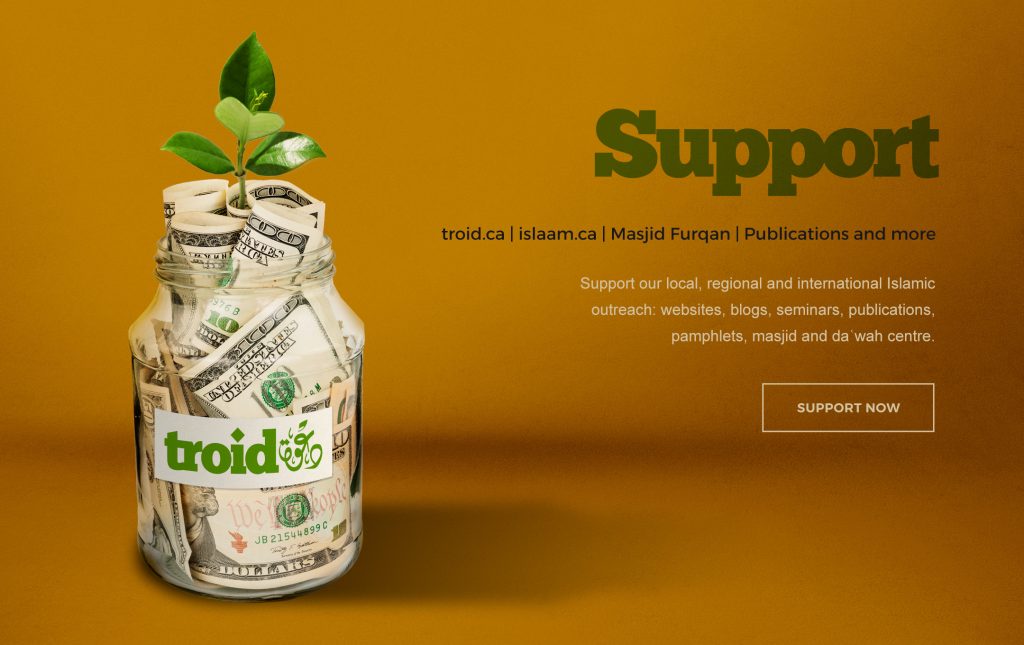 Finally, we advise Salafīs in all places to aid and support Troid in whatever capacity available to them, whether that be material assistance, voluntary work or otherwise. In the past couple of years, they have devised a students of knowledge program, to send students abroad and support them in their studies so that in 4-6 years time they can come back and provide a stronger backbone to the community. It is vital that Salafī communities have righteous, upright students of knowledge who take from the major scholars and who consult with them and convey their guidance, rulings and advice back to their communities. This also helps to buffer their communities from mischief-makers and trouble-causers who rely upon ground-level weakness to hatch plots and work intrigues. These types of personalities exist in all communities and caution must be taken against them as they perform their activities in the name of Salafiyyah and in the name of rectification, cooperation and brotherhood. They are of four categories: First, the remnants of the followers of al-Maʾribī and al-Ḥalabī from the Mumayyiʿah who don the garment of Salafiyyah after an apparent repentance. Second, the remnants of the followers of al-Ḥajūrī and his likes from the Ḥaddādiyyah who lurk within Salafī communities whilst harbouring hatred and resentment and revenge. Third, young upstarts who are amazed with themselves, poisoned with love of leadership, ascendancy and wanting to be known, not knowing their limitations and entering into affairs greater than themselves. And fourth, those who show two faces, one to the Salafi Scholars in the East of being firm upon the Sunnah and another in the West wherein they are found cooperating with the people of desires, hizbiyyah and deviation. By forging a direct, strong link with the scholars and acting upon their sayings with sincerity, communities are protected. And Allāh knows best.