The Islamic Salafi Condemnation of the Terrorist Attacks in Kenya 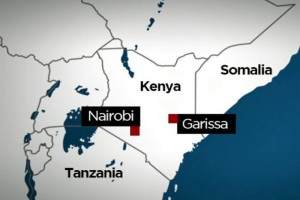 All praise is due to Almighty God (Allah) who sent his Prophet Muhammad as a mercy to the creation. He is the same God that sent Noah, Abraham, Moses, Jesus and all the Prophets – may the peace and blessings of God be upon all of them, for they are brothers to one another, their mothers may be different, but their religion is one.

That which has taken place in Kenya of mass killing of students in the name of Islam is the end result of being deceived by Satan who has beautified terrorism and mindless killing in the minds of those who perpetrated these crimes. We announce without any reservation that the Islam that our Prophet Muhammad (may the peace and blessings of God be upon him) came with is completely innocent of the deeds of the terrorists and their wicked ideology that makes permissible the killing of innocent people. Those who perpetrated these acts have no share of the knowledge, kindness and mercy that was a hallmark of our noble Prophet and of the Prophets who came before him. When the Prophet Muhammad migrated to the city of Medina after being expelled from his home in Mecca, one of the Jewish Rabbis of Medina, Abdullah Ibn Salam, said:

“The Prophet came to Medina and the Jews were apprehensive so I went to see him and when I saw him, I knew straight away that was not the face of a liar. I heard him say: ‘Keep the family ties, pray to your Lord whilst the rest of the people sleep and spread the salaam (salutations).”

It was after this that Abdullah Ibn Salam became a Muslim.

The Prophet Muhammad foretold the rise of a terrorist sect at the end of time in his saying:

“There will appear a people at the end of time, young in age and foolish in thought. They will speak with the best of speech amongst the creation, yet faith will not sink beyond their collarbones. They will exit the religion just as an arrow goes through it target.” (Collected by Bukhari and Muslim)

This sect is known for its ignorance, foolishness, haste and violence. They describe their actions as Jihad, but in reality nothing could be further from the truth. What they engage in is murder, destruction and mass killing.

The great Salafi scholar and former Mufti of Saudi Arabia, Ibn Baz stated in the 1990’s concerning terrorism and those perpetrate it:

“And there is no doubt that this act can only be undertaken by one who does not believe in Almighty God or the Last Day. You will not find anyone who believes in God, or the Last Day with correct and sound belief performing this criminal and vile act due to which great harm and corruption has occurred. Only vile souls, which are filled with enmity, jealousy, evil, corruption and absence of faith in God and His Messenger, can perform the likes of these acts. We ask God for wellbeing and safety.”

“And there is no doubt that this is from the greatest of crimes and from the greatest types of corruption in the earth. And those who perform the likes of this are more deserving of being killed and being restrained on account of what they have committed of great sin. We ask God that He makes them lose their efforts and shackles them and their likes and that He saves us from their evil and the evil of those like them, and that He utterly destroys their plots, indeed He is Lofty and Majestic, and Generous and Kind.” (Majmu Fatawa Ibn Baz 9/253-255).

“So there are extremists who obligate Jihād in any and every situation without applying any pre-conditions or principles. They do so even if the Muslims are weak and powerless, and even if they do not have a Ruler over them. So each one fights the “enemy” and engages in battles and skirmishes without a legitimate rulership, and they kill the non-Muslims whom it is not permissible to kill. They kill people who have a treaty with the Muslim countries and they kill those who are protected by agreements and covenants. So this is extremism and not Jihād. Rather, these extremists go even further by blowing up homes, residential buildings and built-up areas of cities. They kill Muslims and non-Muslims, young and old, males and females, mercilessly. They put terror and fear into the Muslims and non-Muslims who live under the protection of the Muslim governments. Then they have the audacity to call that Jihād! Rather that is corruption and not Jihād. They draw the Muslims into evil, destruction and ruination. Jihād has pre-conditions and governing principles that are made clear in the books of Quranic Commentary, Prophetic Tradition and Islamic Jurisprudence.”

The appearance of the ideology of Al-Shabab (Somalia), ISIS (Syria and Iraq), Boko Haram (Nigeria) and Al-Qaeda in the 21st Century is not a new phenomenon. Muslim governments over centuries have encountered these types of rebellious movements known in Islamic terminology as the Khārijites. Along with the Shi’ītes (embodied in the modern-day Iranian regime), these Khārijites have never recognized any legitimacy except their own. Their goal being to seize power and to establish a regime of merciless brutality, in the name of “justice”! The great Salafi scholar and historian, Ibn Kathīr, who died over seven centuries ago penned the following words that resonate strongly in our times, and one senses the deep insight of this scholar. He said, regarding the Khārijites:

“If they ever gained strength, they would surely corrupt the whole of the earth, including Iraq and Syria. They would not leave alone a child, whether male or female, neither a man or a woman. This is because as far as they are concerned the people have caused corruption. A corruption that cannot be fixed except by mass killing!“ (See Al-Bidāyah, 10/584-585).

This is a bleak reminder of what can befall nations if these extremists are allowed to flourish without restraint.

Today, we are witnessing the fulfillment of these words of Ibn Kathīr at the hands of Al-Shabab and Boko Haram and other terrorist insurgencies in Africa, the Middle-East and elsewhere. These murderers who, in the name of Islām, have instituted the mass killing of people on the basis that rectification cannot take place except by the death of the masses. The killings perpetrated by Al-Shabab and Boko Haram and other extremist groups is worse than the murder committed by the sinners, because the sinners do not claim that they have license to kill from God, whilst the extremists claim that God Almighty Himself has commanded them with this slaughter, and therefore they believe they are doing God’s work! For this reason, the response to this extremist ideology must be well thought out, robust and rooted in Islamic doctrine. At the theological level, the extremists must be combatted with Quranic and Prophetic narrations backed up by the sayings and writings of the earliest generations of Muslim scholars. This has a two-fold effect. Firstly: It helps to shut down the Jihādist propaganda machine that claims to be following the Qurān and the teachings of the Prophet Muhammad (which is, of-course, untrue). Secondly: When unsuspecting Muslim youth hear and read these refutations, they will see through the false arguments of the extremists. Another benefit here is that the non-Muslims who have been presented with an unsightly image of Islam will realize that these terrorists do not represent Islam and have in actuality marred the beauty of the Islamic religion.

2. Recognizing an Extremist or one who is being Groomed into Violent Extremism

There are certain signs and signals that are apparent in an extremist that are recognizable for the one who knows what to look for. Recognizing these signs is essential in combatting radicalization of Muslim youth in the West. To list just a few of those traits:

3. One must not be Deceived by the Extremists due to their Outward Display of Piety

Over a thousand years ago, the Salafi scholar, Al-Ājurrī said regarding the extremist insurgents:

“Neither the scholars of old nor of these times, ever differed about the Khārijites. They regarded them as an evil people who were disobedient to Allāh and His Messenger even though they prayed, fasted and exerted themselves in worship. And all of this was of no benefit to them.” (Ash-Sharī’ah 1/135)

“They permitted the killing of children, yet they did not allow the eating of any fruits of trees without paying for it! They tired themselves out with worship, and would frequently stay awake, yet they raised their swords against the Muslims. Even Satan himself could not have imagined the extent of their evil!” (Talbīs Iblīs, p. 91)

4. What Can I Do If I Know Of Extremists Who Are Inciting Or Plotting Terrorist Attacks?

The Salafi position regarding those who incite or plan terrorist acts such as suicide bombings, kidnapping or killing is that Muslims should inform the authorities. This is regardless of whether these acts are perpetrated in Muslim or non-Muslim countries. Muslim communities must be at the forefront of stamping out these non-Islamic acts that are done falsely in the name of Islām. The Prophet (may the peace and blessings of God be upon him) said: “There is not a people amongst whom sins are committed, and they are stronger than those who commit them yet they do not prevent them, except that Allāh sends His punishment upon them all.” The Messenger (may the peace and blessings of God be upon him) described these Khārijites, explaining that they have no understanding of Islām. He said:

“They will recite the Qurān but it will not go beyond their throats. They will exit the Religion just as an arrow passes swiftly through its target.”

Parents too have a mighty responsibility to cultivate their children upon the true and correct Salafi understanding of Islām, so that they are not deceived by these impostors.

5. Salafi Islām Demands That The Muslims Deal Justly And Kindly With The Non-Muslims

Allāh has stated in the Qurān:

“Allāh does not forbid you to deal justly and kindly with those who did not fight against you on account of Religion, and they did not drive you out of your homes. Indeed Allāh loves those who deal with equity.” (Qurān 60:8-9)

Allah stated in the Quran the following words that are a guide for every true believer:

“Call to the Path of your Lord, with wisdom and a good admonition. And debate with them with that which is best.” (Quran 16:125)

“And who is better in statement than he who calls to Allah and does righteous deeds.” (Quran 41:33)

“And by the Mercy of Allah, you (O Prophet) dealt with them gently. And had you been severe and harsh­-hearted, they would have broken away from about you so pass over their faults, and ask Allah’s forgiveness for them and consult them in the affairs.” (Quran 3:159)

And there is the statement of Allah, the Mighty and Majestic, when He sent Moses and Aaron to the Pharaoh:

We ask Almighty God (Allah) to enable every Muslim and non-Muslim to fully understand these words and to comprehend the true Islamic position with respect to the people of misguidance. We also ask Him to grant every person the ability to grasp the true message and beauty of Islam as it was revealed to the noble Prophet of Islam.

Indeed all praise belongs to Allah, the Lord of all creation – and may peace and blessings be upon the Prophet, his family, his Companions and those who follow him precisely until the Day of Judgement.