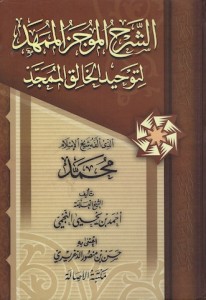 Chapter 13: To Seek Rescue & Deliverance From Other Than Allaah, Or To Supplicate To Other Than Him, Is From Shirk

The saying of Allaah, the Most High,

“And do not invoke besides Allah that which neither benefits you nor harms you, for if you did, then indeed you would be of the wrongdoers.”

“And if Allah should touch you with adversity, there is no remover of it except Him; and if He intends for you good, then there is no repeller of His bounty. He causes it to reach whom He wills of His servants. And He is the Forgiving, the Merciful.”

“So seek from Allah provision and worship Him.”

“And who is more astray than he who invokes besides Allah those who will not respond to him until the Day of Resurrection.”

“Is He not best who responds to the desperate one when he calls upon Him and removes evil..”

“Indeed rescue is not not from me, rather rescue is sought from Allaah.” [1]

([1] Reported by Ahmad in Al-Musnad, 22758, with the wording: Abdullaah narrated to us saying: May father narrated to me saying: Moosaa Ibn Dawood narrated to us saying: Ibn Lahee’ah from Al-Haarith Ibn Yazeed, from Alee Ibn Rabaah that a man heard ‘Ubaadah Ibn Saamit saying, “Allaah’s Messenger came out us, so Abu Bakr said: “Come stand, let us ask the Messenger of Allaah to rescue us from this hypocrite.” So Allaah’s Messenger said: “Rescue is not sought from me, rather rescue is sought from Allaah.” Shaikh al-Waleed Ibn Abdir-Rahmaan Aal-Faryaan in his checking of “Fat’hul-Majeed said: “Tabaraanee narrated it in “Al-Mu’jam al-Kabeer” as occurs in “Majma’ az-Zawaa’id” (10/159). He said: All the narrators are the narrators of the Saheeh (of Al-Bukhaaree) except for Ibn Lahee’ah and he is hasan (good) in hadeeth. Also narrated by Ibn Sa’d in “At-Tabaqaat” (1/387) from ‘Ubaadah with the wording: “Indeed rescue is not sought with me, rather it is sought from Allaah, the Blessed and Most High.” Al-Haafidh Ibn Taymiyyah said in the book, “Al-Istighaathah” (152): “The narration is sound for support and its meaning is supported by the Book and Sunnah.”)

Important Issues of the Chapter:

“Al-Istighaathah” (seeking to be rescued) is the supplication of the one who is distressed, and it occurs in times of severe hardship. It is of two types:

So the permissible type is in accordance to the saying of Allaah, the Most High:

So Allaah cited this Istighaathah, as a confirmation of it. That is because this Israa’eelee (from the tribes of Israa’eel) sought to be rescued by Moosaa (alaihi salaam) in a matter that Moosaa had ability over. So he struck the Copt and he died from that.

From this story which Allaah has mentioned from Moosaa (‘alaihi salaam) and his rescuing the Israa’eelee, and the one who he was rescued from (i.e. the Copt), we understand that seeking rescue with a person in an affair that it he has ability over is permitted.

As for the impermissible Istighaathah, then that is the seeking of Istighaathah from the deceased and whatever resembles the deceased in ruling such as rocks, wood and idols. And likewise it is impermissible to seek Istighaathah from the living in those affairs that none has ability over except Allaah, such as sending down of the rain or the return of something lost, the cure of an illness, and other than that from the affairs that none has the ability over except Allaah – so seeking Istighaathah [to be rescued] by the created beings in these affairs is Major Shirk. And Allaah is the one who answers his servants, and He is the one who alleviates the distress, and gives them ease in their difficult affairs. And there are Quranic verses that show the forbiddance of seeking Istighaathah from other than Allaah, such as His saying:

“And do not invoke besides Allah that which neither benefits you nor harms you, for if you did, then indeed you would be of the wrongdoers.”

And likewise the verse that comes after it. And also His saying:

“Indeed, those you worship besides Allah do not possess for you [the power of] provision. So seek from Allah provision and worship Him.”

“And who is more astray than he who invokes besides Allah those who will not respond to him until the Day of Resurrection.”

All of these verses forbid the polytheists from their supplications to other than Allaah and their seeking deliverance (Istighaathah) with one who is not able to rescue them or help them from that which they request from him.

However, seeking Istighaathah (deliverance and rescue) with Allaah is an affair that is legislated and sought – He alone is the One who has the ability to answer your supplications, and to alleviate your distress, and to give you what you seek, and to save you from what you flee from and fear. Allaah stated:

“[Remember] when you asked help of your Lord, and He answered you, “Indeed, I will reinforce you with a thousand from the angels, following one another.”

And Allaah rebuked those who claimed that the ones that are supplicated to besides Allaah are able to answer the one who supplicates to them, and that they grant them what they want, and that they remove the distress from them, so He said in rebuking them:

“Is He [not best] who guides you through the darknesses of the land and sea and who sends the winds as good tidings before His mercy? Is there a deity alongside Allah? High is Allah above whatever they associate with Him.”

All of these verses prove the forbiddance of supplicating to other than Allaah, the Mighty and Majestic- and that to do so is Major Shirk.

As for what is narrated from At-Tabaraanee with his chain of narration that in the time of the Prophet (salallaahu ‘alaihi wassallam) a hypocrite would harm the believers, so some of them said: “Come with us and let us seek help from the Messenger of Allaah to be rescued from this hypocrite.” So the Prophet (salallaahu ‘alaihi wassallam) said: “Indeed help to be rescued is not sought from me, rather help to be rescued is to be sought from Allaah.”

Firstly: In the chain of narration of this hadeeth is Ibn Lahee’ah – and his books were burned. So he became mixed up. For this reason we are in doubt as to the authenticity of this hadeeth.

Secondly: Upon the assumption of the authenticity of the narration, then the Prophet (salallaahu ‘alaihi wassallam) disliked this terminology, and that was the saying: “Let us go and seek to be rescued by Allaah’s Messenger.” If they had said: Let us seek the aid (Isti’aanah) of Allaah’s Messenger against the harm of this hypocrite, then that would have been better for them than their usage of the term “let us seek to be rescued by..” (bi-nastagheeth) – alongside affirming the fact that seeking Istighaathah from a person is permitted in an affair that he has ability over. The forbidden istighaathah is the seeking to be rescued by one of the created beings in an affair that no one has ability in except the Creator, Allaah. However, the actual usage of the term Istighaathah with the creation is what is being censored or rebuked, and Allaah knows best – because the Companions of Allaah’s Messenger were taught by Allaah, and taught by His Messenger (salallaahu ‘alaihi wassallam) with respect to what it is necessary to be said from terms and words.