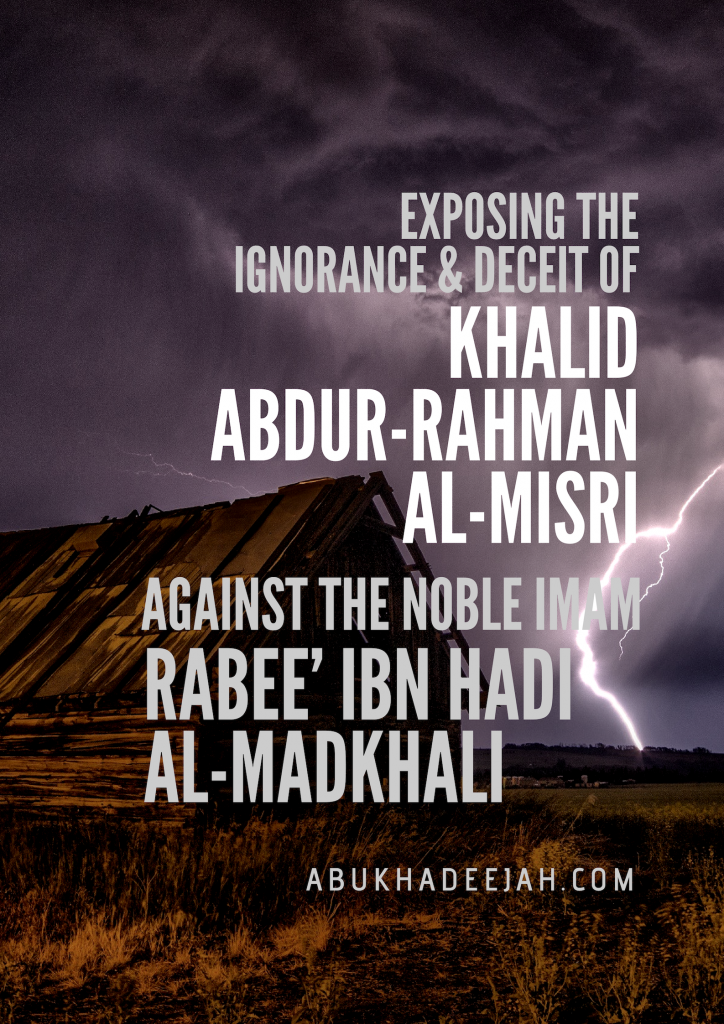 Abu Hātim Ar-Rāzi (رحمه الله) stated: “The distinguishing sign of Ahlul-Bid’ah is their reviling of Ahlul-Athar.”

A few days ago, I heard a recording of an individual called Khalid Abdur-Rahman Al-Misri wherein he exposes himself as a reckless, self-conceited ignoramus by passing judgements unjustly against Scholars of the Sunnah and specifically against our Shaikh, the ‘Allāmah, Rabee’ Ibn Hādi ‘Umayr Al-Madkhali (حفظه الله). In this lecture, he claims that some of the scholars of Ahlus-Sunnah such as Shaikh Rabee’ have deviated from the Sunnah and have shown agreement with the stance of the Khawārij due to them issuing fatāwa in affairs that revolve around fighting and war in other lands.

Exposing the Deceit and Ignorance of Khalid Al-Misri 7-0


He states that some of the scholars gather together and consult with one another in affairs related to fighting in Syria, Libya and Yemen; then they issue fatāwa and send them by word of mouth. He then goes on to say that these are secretive, innovated and Khārijite gatherings. This Khalid Al-Misri expresses his surprise that the scholars do not forbid these gatherings and instead regard them to be gatherings of consultation (shoorā) and that the scholars are in authority (ūlul-‘amr). [1]

He makes clear that his criticism is directed primarily at Shaikh Rabee’ though he does allude to other scholars as well. He accuses them of deviation from the Sunnah and deviation from the foundations of the Religion. He states without shame that “Shaikh Rabee’ has deviated from the Sunnah and has agreed with the saying of the Khawārij.” No amount of flowery speech can mask this blatant attack against the Scholars of Sunnah, and specifically against one of the Imāms of the age, Rabee’ Al-Madkhali. This lecture was posted and remains posted on the website of the party of Khalid Al-Misri, which is further proof that there is small band of inciters with him who encourage each other to challenge the scholars of Hadeeth and Sunnah seeking to belittle and dislodge them.

Now compare the words of this upstart, Khalid Al-Misri [2], to the words of the Faqeeh, the noble Salafi scholar, Shaikh Ibn ‘Uthaimeen who was asked: “There is a question concerning the books of Shaikh Rabee’?” So, he (رحمه الله) replied: “It is apparent and clear that this question is not in need of my response. And [I say] just as Imām Ahmad Ibn Hanbal was asked about Ishāq Ibn Rāhooyah and he replied, ‘Someone like me is asked about Ishāq? Rather, Ishāq is to be asked about me.’ And I spoke at the beginning of my speech about that which I know about Shaikh Rabee’, may Allāh grant him success, and what I mentioned has never ceased to be what I hold about him in my soul, up until this time. And his arrival here and his words that have reached me, then no doubt, they are such that they will increase a person in his love for him and in his supplication for him.”

The following short article addresses and challenges the accusations and false assertions of Khalid Al-Misri (and his allies in deceit) that he has aimed at Shaikh Rabee’. Though this article is in English, these same questions have been posed to Khalid Al-Misri in Arabic, and he has not responded, nor recanted, nor repented.

[1] Khalid Al-Misri and his group challenge the well-known and established position of the Sahābah and the great scholars which states that those in authority (ūlul-‘amr) include the scholars along with the rulers, each with a responsibility to shepherd the Ummah. I will discuss this later in this article, inshā-Allah.

[2] Khalid Al-Misri himself admits that he walked with Jama’at At-Tableegh for over fifteen years before Allah guided him to the Sunnah through the scholars of the Salafi da’wah – so it is upon him to fear Allah and know his small station and not fabricate falsehood against the mountains of knowledge. A small goat that butts its head against a mountain should have mercy on its own head more than on the mountain!

Read the rest of this article here.

Ibn Taymiyyah (رحمه الله) stated: “And as for the one from whom it is known that ijtihād is admissible, then it is not permissible to mention him from the viewpoint of vilification and ascribing sinfulness to him, rather it is obligatory, due to what he possesses of Imān and taqwā, to have allegiance for him and to love him.”